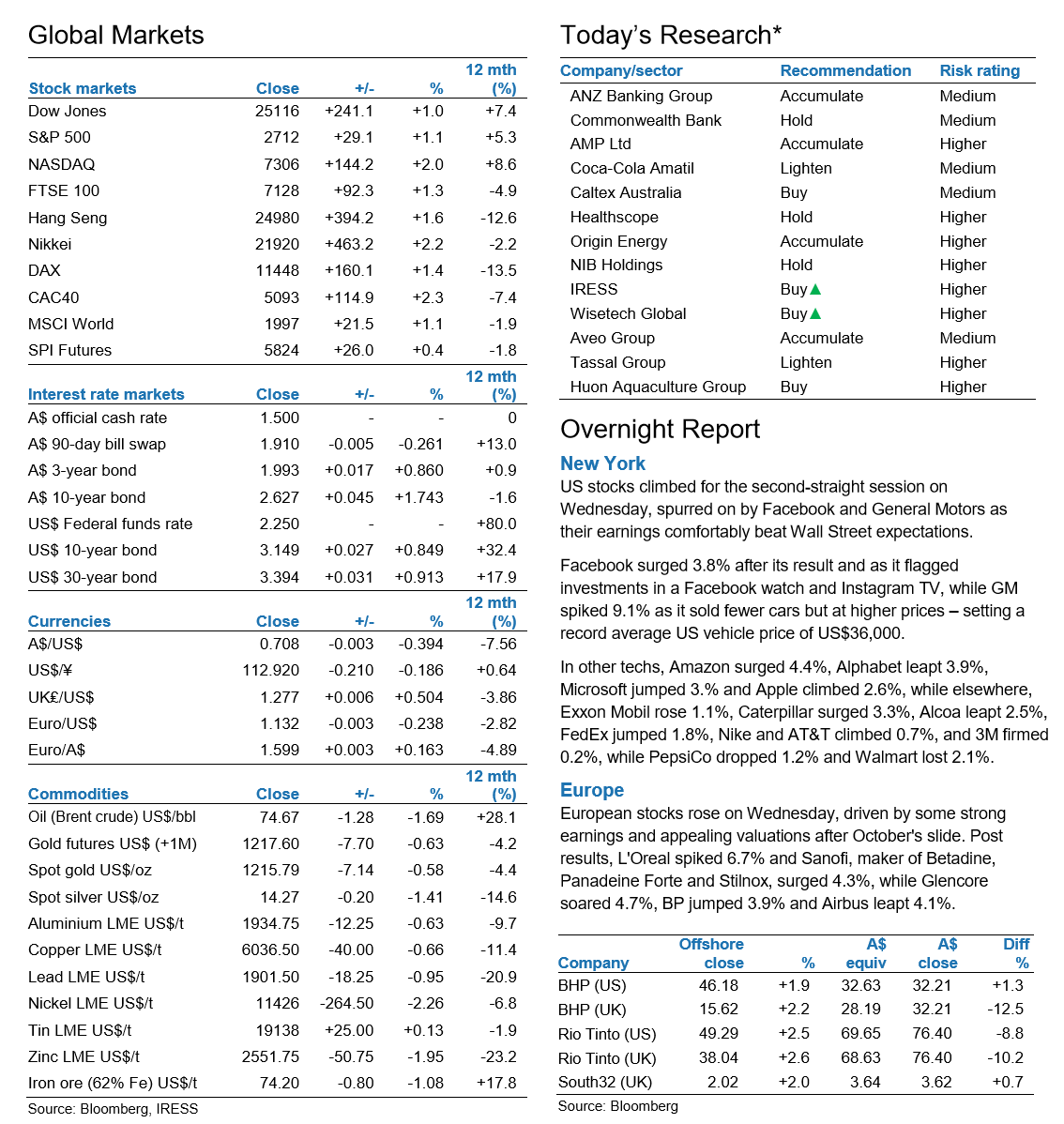 ANZ – 2H18 result – bottom line strong, helped by low BDD – Ticker: ANZ.AX, Closing Price: 25.66 AUD, Target Price: 29.00 AUD, Recommendation: Hold. 2H18 cash NPAT stronger than expected, but underlying profit in line – ANZ’s 2H18 result was strong at the bottom line, with cash NPAT of $2,994(¥329,340)m coming in 2% above our forecast. This was helped by a very low bad debts charge of $280(¥30,800)m, which translated to BDD/GLA of 9bps (DBf 15bps). The pre-provision profit of $4,569(¥502,590)m was in line with our forecast. Overall revenue and expenses were close to expectations, albeit the composition was different. The weak margin outcome was offset by better other operating income. On the positive side, the group’s CET1 ratio of 11.4% was stronger than expected (DBf 11.1%), and asset quality remained benign. The final dividend of 80cps was in line with expectations. Overall, this looks like a sound result at the underlying level, with further support from the low BDD.

Mineral Resources – 1QFY19 First look: Softer shipping in Sep Q as operations turn over – Ticker: MIN.AX, Closing Price: 14.32 AUD, Target Price: 15.50 AUD, Recommendation: Hold. 1Q largely in line but read-through not overly positive for 1H – MIN has reported its Sept Q results. Production was largely in line but shipments were softer at 2,133kt (-30% QoQ) due to the cessation of Carina operations and wind down of DSO shipments from Wodgina.

Retail – September Food CPI – Fresh drives inflation higher – Packaged food posts strong inflation. On a sequential basis ABS food CPI posted Inflation of 0.5%. We focus on year-on-year movement which is more indicative of what retailers will report. On this basis, Food prices inflated by 1.6% (excl. alcohol and tobacco) in the September qtr which was stronger than the 0.3% in the June qtr and above the 12 month average of 0.5%. Packaged grocery prices were up 0.3% which is stronger than the 0.1% in the previous 3 quarters while fresh inflation jumped to 3.1% from 1.1% deflation in June. Our DB Supermarket Inflation Index suggested an improvement in Packaged Goods inflation and a large improvement in Fresh inflation. We believe packaged inflation is a more important driver of food sales given the elasticity in fresh (see DB Supermarket Inflation Index – 1Q19. Fresh drives prices to inflation published 5 Oct 18).

Coca-Cola Amatil – KO result readthrough – Ticker: CCL.AX, Closing Price: 9.66 AUD, Target Price: 8.50 AUD, Recommendation: Sell. The Coca Cola Company impairs its associate in Indonesia – The Coca Cola Company (KO) released its quarterly results for the three and nine months to September 28. The most important readthrough for Amatil came from an impairment that KO recognised against its equity accounted associate. The ‘other-than-temporary’ impairment charge amounts to US$205(¥22,550)m and relates to PT Coca-Cola Bottling Indonesia. The company has said that the impairment was primarily driven off the back of revised projections of future operating results. This was due to unfavorable macroeconomic conditions and an adverse FX movement.

Fortescue Metals – Grade and China’s gross margin – Ticker: FMG.AX, Closing Price: 4.00 AUD, Target Price: 3.70 AUD, Recommendation: Sell. At the time of Q1, we were visiting the customer base in China.

Whitehaven Coal – Riding in Glencore’s slipstream, pushed along by China – Ticker: WHC.AX, Closing Price: 4.85 AUD, Target Price: 6.00 AUD, Recommendation: Buy. We update our views and valuation on WHC for – In China we recently met with power users and coal producers which pointed to continued imports of high energy coal as the Energy Bureau holds up efforts to increase domestic coal production.

Call to action – ANZ Banking Group ANZ has reported FY18 cash earnings from continuing operations of $6.7(¥660)bn, 0.8% less than we expected on the same basis. A final dividend of 80cps fully franked has been declared in line with our expectation. We believe ANZ’s result does not have any unexpected negative read-throughs for upcoming major bank results. We believe the rough period associated with ANZ’s restructuring and capital portfolio rebalancing is now approaching an end and we expect the next couple of years to be smoother than the last couple of years from this perspective.

NIB Holdings Limited (A$5.54(¥550)) ADD TP A$6.49(¥660) Favourable claims tailwinds continuing. NHF has today upgraded FY19 Group Underlying Operating Profit guidance by ~5.5% to at least A$190(¥20,900)m (previously at least A$180(¥19,800)m). The driver of the upgrade continues to be a benign claims environment driven by low industry claims utilisation trends. We upgrade our NHF FY19F/FY20F EPS by 4-7% factoring in revised guidance and lower claims going forward. Our NHF valuation increases to A$6.83(¥660) (price target A$6(¥660).). We move NHF to an ADD recommendation on valuation grounds. We think the recent ~15% fall in NHF’s share price since August is overdone particularly given today’s earnings upgrade.

AMP Limited (A$2.47(¥220)) HOLD TP A$2.97(¥220) Some necessary knowledge gaps filled in. In light of the disappointing market reaction to its portfolio review last week, AMP has provided additional clarity on some key review details. The key positive, in our view, was greater disclosure of AMP’s excess capital level post the AMP Life transaction (A$755(¥83,050)m above management’s target surplus). This supports a commitment to return net cash proceeds to shareholders. While AMP aims to replace A$65(¥7,150)m of the A$80(¥8,800)m-A$90(¥9,900)m lost Wealth Management earnings from the transaction, we retain some skepticism if this can be achieved. We downgrade AMP FY18F/FY19 EPS by 1-4% but lift FY20F EPS by ~7%. Trading on 10x FY19F/FY20F PE AMP remains cheap, but risks are hard to quantify until impacts from the Royal Commission become clearer. HOLD.

Highlands Pacific (A$0.10(¥0)) ADD TP A$0.33(¥0) A Chinese puzzle. The Ramu nickel cobalt project (HIG 8.56% moving to 11.3%) in PNG reported a strong operational quarter, with ore processed and production of contained nickel and cobalt in the Mixed Hydroxide product (MHP) above nameplate capacity. The “streaming deal” between HIG and Cobalt 27 (KBLT.V) requires approval by the Ramu partners – the PNG government entity MRDC, and the project operator MCC. MRDC has confirmed its support for the deal. Ramu’s revenue was minimal as the renegotiation of expired sales contracts “took longer than expected”, and product shipments largely suspended for the Quarter. Sales and shipments resumed in October.

Resapp Health Ltd (A$0.12(¥0)) ADD TP A$0.24(¥0) Over reaction. RAP released its top-line results from its US SMARTCOUGH study, with positive results in the largest market indications for LRTI, URTI and asthma, and expects to lodge its FDA de novo application before year end. Clinical diagnosis in the US of respiratory disease proves to be highly variable with a third of tests requiring a third adjudicator to act as a tie-breaker. While disappointed that the pneumonia results fell short of the benchmark 70% PPA and NPA, we believe the market has overreacted considering the relatively small market size for this indication in the US. We have lowered our forecasts to reflect timing of telehealth revenue. The target price has been reduced to A$0.24(¥0) from A$0.35(¥0). Add recommendation maintained.