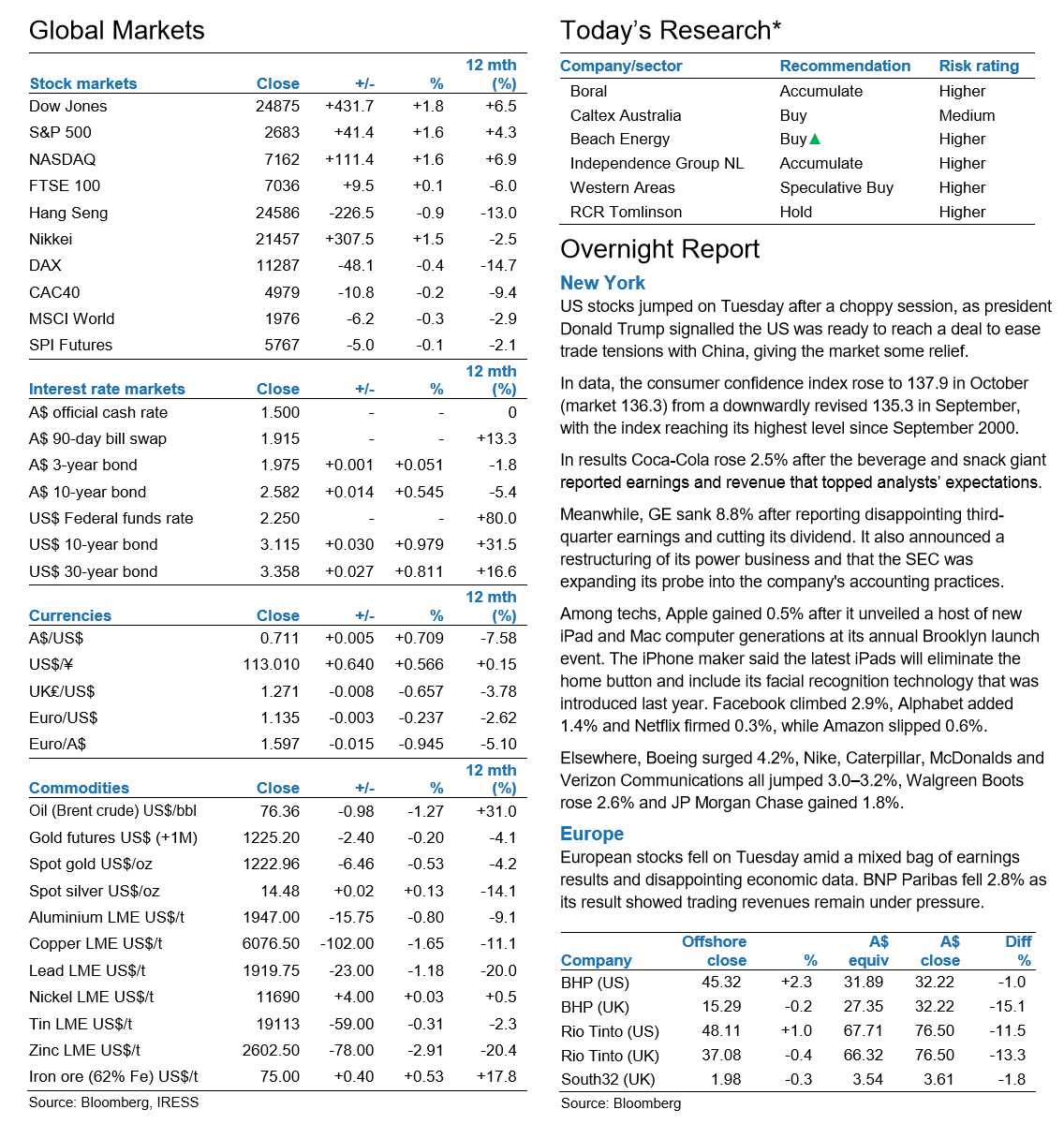 Newcrest Mining – Cadia site visit – plenty of time to pull the recovery levers – Ticker: NCM.AX, Closing Price: 20.76 AUD, Target Price: 23.00 AUD, Recommendation: Buy. We recently visited NCM’s Cadia mine near Orange, NSW. Over the last two years the operation has been impacted by a major seismic event and a tailings dam failure. Despite this NCM is progressing plans to enhance the operation over the c.50yr remaining mine life. Having such a long mine life lends itself to being able to problem solve issues and pull levers to deliver the highest value outcomes.

Paper & Packaging – Earnings estimates revised on new FX assumptions – Slightly negative for Amcor and Pact. Following changes to Deutsche Bank’s FX assumptions, we have reviewed our earnings estimates for the Paper & Packaging sector. The change to our FX assumptions are slightly negative for both Amcor (down 1% in FY19 but unchanged in FY20) and Pact Group (down 1%). Our valuation for Amcor remains $16.65(¥1,760)/share and our Pact Group valuation remains $5.80(¥550)/share. We have Buy ratings on Amcor and Pact Group, and a Hold rating on Orora.

Viva Energy Group – Refining volumes solid but margins weak- Ticker: VEA.AX, Closing Price: 2.15 AUD, Target Price: 2.65 AUD, Recommendation: Buy.
Solid refinery throughput in September but margin worse than expected – VEA released a Refining update for September. Crude Intake was 3.6MBBLs which follows on from the 3.1MMBBLs intake in August and 3.5MBBLs in July. This implies an average intake of 120kBBLs/ day which is pleasing given we believe there was some impact from the recent outage based on commentary that the refinery “returned to full production in early September”. The Geelong refining margin (pre energy costs) was US$8.1(¥880)/ BBL which is significantly below the US$11.1(¥1,210) achieved in August. This is partly the result of a lower Singapore benchmark margin (US$4.75(¥440) in September vs US$5.84(¥550) in August) but also a much smaller Geelong margin premium (US$3.35(¥330) vs US$5.26(¥550)). This dynamic is shown in Figure 1. Regional refining margins are currently tracking broadly in line with their long term average (refer Figure 2).

Call to action – Lovisa Holdings Ltd. LOV’s trading update showed YTD LFL growth of -0.9% – reflecting the cycling of a strong comp stack over the last few years. Australia was the weakest region. The GM appears to have held up (ie at the cost of achieving better comps). LFL sales volatility/weakness is likely to persist over the balance of FY19, however we are more focused on LOV’s store rollout potential as the group’s key driver. We think CY19 will be the year LOV takes a more definitive stance on the pilot markets’ footprint potential, which have the potential to exceed our base forecasts. We upgrade to an Add. c46% of LOV’s capital is owned by the incoming Chairman and CEO – we are less concerned with short-term LFL sales blips in the context of the longer term global growth potential and note the growing cash position.

US Market: A bounce back in trade-sensitive chipmakers pushed US stocks higher on Tuesday, after Washington cut off a Chinese semiconductor maker from its US suppliers.

European Market: European shares ended a choppy session lower on Tuesday, failing to benefit from a positive open on Wall Street as they buckled under the weight of disappointing earnings and data showing the euro zone economy grew less than expected in the third quarter.